Take action and vote for the planet

In this period of presidential campaign , we only talk about purchasing power, immigration, Europe, nuclear power, pensions, and so on.

All these subjects have a direct impact on our daily lives, but they are not the only ones. Biodiversity too - Ah bah flute… we wouldn't say .

With less than 3% of the media debate focused on environmental issues, it is unfortunately a non-issue. And yet, some die-hard committed citizens still and always resist misinformation. Phew, fortunately they are there! Among them are public figures, politicians, businesses and influencers of a new kind. For example, a streamer (a person who broadcasts live on dedicated platforms, such as Twitch) by the name of Jean Massiet organized, with Greenpeace and Oxfam France among others, on March 13, the Debate of the Century (after the Affaire du century). With nearly 185,000 spectators, this event has nothing to envy to all the pseudo debates broadcast on traditional channels. This kind of event, although rare, shows that French citizens are ready to discuss all environmental issues and need to see change. At Oé , we are convinced that the environment is not a matter for greens, the rich, the privileged, the “gaucho”, the young, the hippies, etc. Like all the other themes of our daily lives, they concern everyone at their level.

We feel that more and more people are ready to compromise or seek solutions. But what happens then on the side of politics?

Why are our politicians not ready to talk about it?

Again, let's not generalize. The Green Party, for example, has always made it its main campaign topic. However, in the collective imagination, political parties associated with the environment are often less credible. We have often heard that they would not be able to run a country, that “it's not the plants that make the purchasing power” or even that “we're fed up with these hippies”.

We are not here to tell you if this is true or false, but we can tell you that the reverse is not true. If they don't talk about it at all, they wouldn't be more credible, on the contrary.

In a context as uncertain as the last two years, it has been noticed that political speeches are more aimed at saying "I don't agree" and "he's wrong" or "it's his fault", rather than try to find real solutions and say, “I will improve your daily life”.

Knowing that this is the second most important subject for young people, our presidential candidates should start asking themselves the question of reviewing their program.

Here's the idea of ​​the day : we don't think we should completely stop talking about other subjects. But we plead for the environment to be at the center of everyone.

Without a blue planet to welcome us, there will be no work to go to and no country to immigrate to and all of these topics will be as antiquated as they are irrelevant. As Thomas, our co-founder, likes to say: “ There is only one crisis: it is environmental and social”. And he's not the only one to think so. On March 23, we are ready to launch the #OnEnParlePas campaign, a plea for the oceans aimed at presidential candidates. To join the movement it's here: #OnEnParlePas 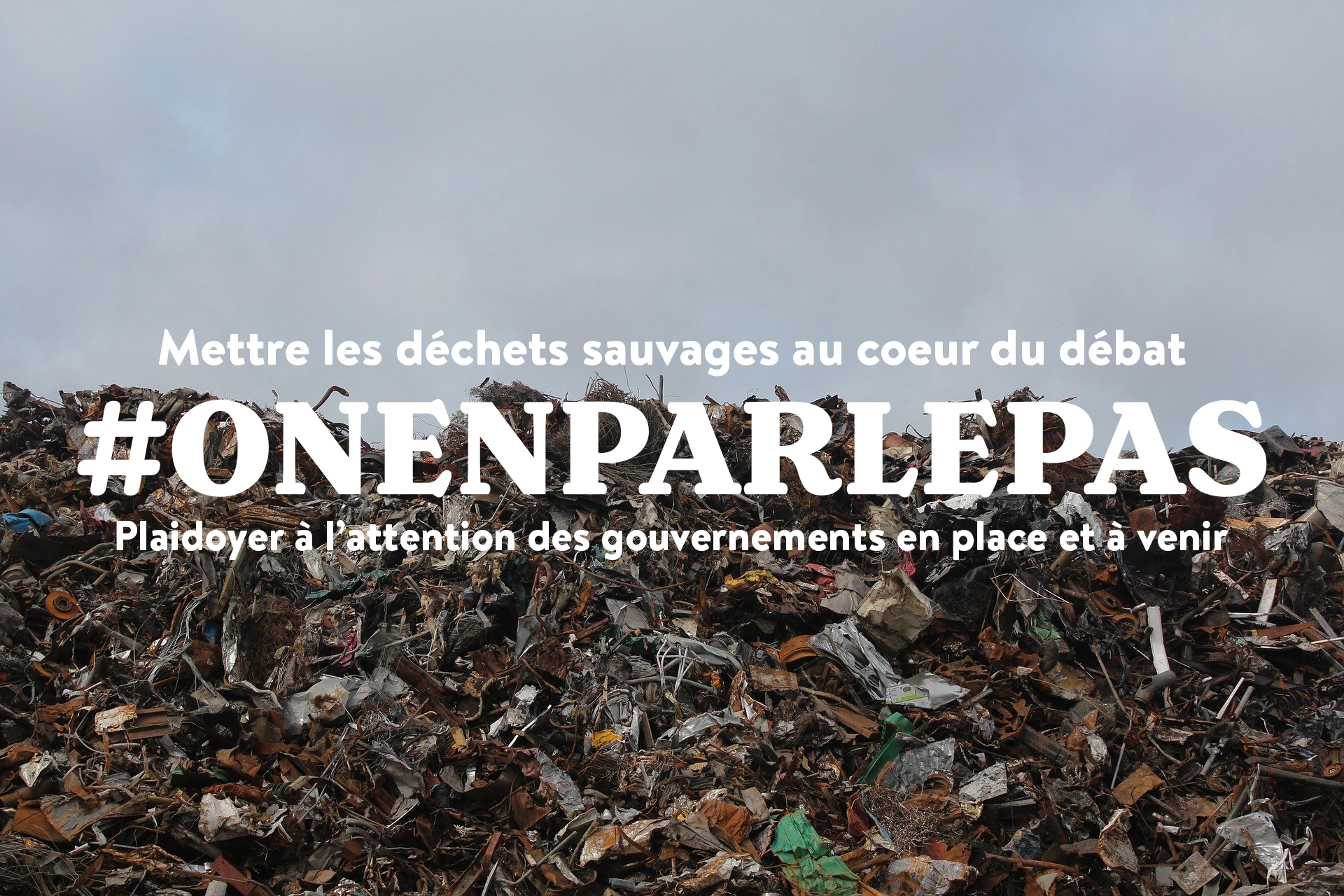 The “vote for” campaign

Perhaps one of the solutions would be to vote for biodiversity , or to vote for sustainable consumption , or for social inclusion, for example. We understand you, it's complicated to break away from topics that monopolize the conversation. But that's no reason to forget the others. When you ask your loved ones, according to them, what is the priority for the next few years, everyone will surely have a different answer to the question. But we all have one thing in common, the desire to live well, in good health, in freedom and without the perpetual fear that our children will not have the future we dream of for them.


And if we voted for our convictions rather than for a party or for a personality. If we observed, inquired, asked the right questions and tried together to determine what matters to us, we are convinced that we would manage to move the lines.

With Oé, we choose biodiversity , how about you? Bees, slow fashion, the impact economy, mental health, the oceans, the living...the planet? Are you still hesitating?

Neither the ads for the latest revolutionary eco-packaging nor Greta Thumberg's speeches convinced you? We will try to prove to you that helping the environment, our planet and living things is not more complicated, more expensive or more time-consuming than not doing it.

Let's start with the beginning…

You all know them by heart, we are not going to share anything new with you but know that, yes, these daily actions have a real impact because they are done massively.

It's still much simpler today thanks to the small logo that tells us what to throw where. 100% of the waste that goes into the yellow bin will not end up being reused, a lot will also be buried or burned. Either because they are not recyclable or because the sorting center does not have the capacity to recycle them all.

Recycling from person to person is the right plan to reduce waste. By buying a used product, you give it a second life, the opportunity to live new adventures out of the dark cupboard where it was patiently waiting to be used - it's beautiful isn't it? In addition it is much lighter for the wallet. You see, we told you that ecology rhymes with economy !

We can never repeat it enough, seasonal fruits and vegetables are great.

Local products are no more expensive than those imported from the other side of the world. Look at that, your zucchini that comes from Guatemala, it had to take the plane, pay customs, move around the country and pay the supermarket (and also the producer but in the final price this cost is unfortunately minimal). While your zucchini from Dédé, she took the truck and… that's it. You only pay the producer's remuneration. As Dédé is a French citizen, he pays utilities and wants to receive a decent salary at the end of the month so your zucchini will be the same price. This is not rocket science !

This privilege of democracy has a power unsuspected by some. Voting is not useless, even when it is white, the vote carries a meaning, an opinion, a voice.

Conversely, not voting means giving others the opportunity to speak in your place because no one can hear what you are not saying. By voting, we express what we want to see change and evolve in the coming years. As we told you, we want to see biodiversity flourish and flourish in good health.

Only you can decide your voice, don't let it die out.

To find out if you are registered on the electoral list next to your home, it's here .

Seasonal fruits and vegetables are good, sustainable ones are better. It's not that easy for everyone so we'll never point fingers at those who don't feel capable of it. On the other hand, we can still show you that it is simpler than you imagine.

The Eat Sustainable movement proposes 12 bills aimed at building a resilient agricultural model and healthy food accessible to all. In a France where 8 million people rely on food aid, sustainable consumption is as much a social issue as an environmental one.

Even without legislation, that does not prevent us from making efforts by consuming products from short circuits, which correctly remunerate their producers, from organic farming, less processed and packaged.

Here we begin to get to the heart of the matter. The advantage is that you can start step by step with this kind of habit change. No need to be radical. You can start with chocolate chips, coffee or even pasta. The advantage is that you do not need to go to a specialized organic and ethical store to buy bulk , French law requires all French supermarkets to have a bulk surface in their sales area.

Contrary to what you can find in more “natural” or ethical brands, the products will not necessarily be better for your health than pre-packaged ones, but they will be better for our soils and our air which will no longer be polluted as much by destruction of our waste.

Attention, the bulk is great when you bring back your container, otherwise it lacks meaning.

For our co-lyonnais, know that there is a zero waste association to help us if we don't know where to start or simply to find out. Become a Flexitarian or Vegetarian

Chez Oé part of the team is vegetarian and all our team meals are; but we do not impose anything. In fact, most of the team are flexitarians.

What is the difference ?

A vegetarian diet contains no meat or fish, but may include eggs, milk, cheese etc. (unlike veganism). A flexitarian diet includes less meat and fish. It is a limitation of consumption to return to a balanced diet of animal protein. Contrary to popular belief, a diet with meat at every meal is too high in animal protein, it's not balanced. Like any food, it must be varied.

Traveling far and long was for decades a luxury reserved for the most privileged. Thanks to globalization and technology, many can now discover the world at a lower financial cost. Only, to go far in a short time, you have to take the plane.

The plane, although a revolutionary means of transport, is also by far the most polluting. Did you know that a Paris New York return trip represents 90% of the carbon emissions that everyone should emit to allow us not to exceed 1.5°C of warming. Flying should no longer be a question of practicality, it is above all an environmental question . And as we know that it's not easy to change your habits overnight, we make it easier for you by introducing you to this French alternative to Airbnb and Booking: GreenGo . This initiative, strong in value and humanity, has the mission of making us want to travel better and less far. And it's mission accomplished!

No, but look at the Refuge des Echos in Normandy, it's good, we're convinced... For nature lovers who want to feel close to it, there are also stays in tiny houses. They are “little houses” as their name suggests, placed in beautiful and soothing places, so to speak. The Tiny House Senja are particularly pleasant but above all eco-designed. So not only will you travel less far but your place of residence will also have had a minimal impact on the environment and its ecosystem.